Around the Lab, some of us are long-time podcast junkies and some of us were about eight years old when podcasts came on the scene. We've been publishing our research into web audio from our primer on its history to why it feels stagnated. However, we haven't published much about podcasts or podcasting (because everyone else is writing about it, including listicles from just about everyone from The Atlantic to The Huffington Post) or about the the shows we love for on-demand listening.

I am a typical passionate, born digital audio, podcast-binging, story *listening* persona. I have been "reading" via audiobooks since my teenage years and developed a podcast listening habit out of my resistance to adhering to a broadcast schedule. I have strong opinions about how I manage my shows. On a hard-drive, I have a decade's worth of This American Life podcasts as well as about six or so years of RadioLab. Over the years, I have been known to make people mixtapes of RadioLab, or The Moth, with exact instructions on just how to experience the listening of an episode. I remember listening to the very first of Snap Judgment and Pop Culture Happy Hour, neither of which have I ever listened to as a broadcast. For years, I have relied on the political and culture "gabfest" podcasts from Slate to keep me relevant.

Therefore, we thought it might be fun to share the shows in our current rotations—we certainly have has some fun talking about them around the Lab—and possibly revisit this as a monthly feature. Let us know if you like it. Here's mine this month:

What Joe is listening to:

"I’m surely biased as I know all the stars, but I love the ZED Show. The premise is simple. Designer Sandor Weisz and his kids take turns asking each other a question or two. With episodes clocking in at about 5 minutes, each one is a quick hit of fun kid-energy."

"While its irregular release schedule can be a little maddening, every time a new episode of Nate Di Meo’s The Memory Palace shows up, I listen immediately. The episode that hooked me was Dreamland, specifically Di Meo’s enchanting description of the electric lights at Coney Island. Thinking about other favorite episodes, I want to list so many, but I especially liked 400,000 Stars, which tells the story of how a 19th century Harvard professor found that his maid was a better mathematics assistant than his male students, and Shadowboxing, in which we catch up with boxer John L. Sullivan drunkenly reliving his glory days at the hotel bar. I also appreciate how each episode is only as long as it needs to be, usually between 5-10 minutes."

"Recently, I went back and listened to an old TAL episode that I had saved on my old computer: "The Parent Trap", from 2010. Specifically, the last act about Lucy, chimpanzee who's raised from birth in a human environment."

"The first time I heard this I was around 15, and it's all about the trials and tribulations of parenting and wanting to do what's right for your child and how hard that can be. And that was weirdly enlightening to listen to at that age - right around when you're starting to realize that maybe your parents are actual, real-life people in their own right."

"There's a moment in the episode when Janis, who wasn't Lucy's human "mother" but really helped raise and take care of her returns to see Lucy on the island where she had been left to acclimate back into the wild. There's a very emotional scene when Lucy grabs Janis and hugs her, essentially, and then turns around and walks away to be with the other chimpanzees. It was such a tearjerker. It was very powerful to delve into one of those poignant, painful aspects of a parent-child relationship as an angsty teenager."

"I thought the episode might hold less resonance for me if I listened to it when I was older, but I think you just glean increasingly different lessons each time you listen (like, "call your mother.") There's a beautiful picture of Lucy and Janice's embrace that was published in Charles Siebert's book about her life. I googled it right away after the first time I listened, which I think also really says something. Normally if I'm listening to a podcast and something on the web is mentioned, I rarely get around to looking it up. Inertia. But this picture is just incredible."

From our resident podcaster, Alex Duner: 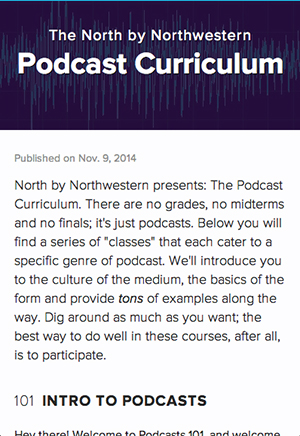 "I recently published a guide for North by Northwestern that includes a lot of my favorite shows. Actually, its designed as a curriculum to help news people understand podcasts, and specific genres of podcasts. The suggestions include the most popular shows to niche content areas, app recommendations and tips for finding news shows."

The best piece of advice I can give about finding a podcast is find the online community of people who love what you love and ask around. There are so many great podcasts; you’re bound to find one you love.

"Currently, I am listening to some Doctor Who shows Accidental Tech Podcast, Night Vale, Lexicon Valley, RadioLab, Startup, and Isometric. Also, the 99pi episode "Wild Ones Live" comes to mind as one of my all-time favorites."

"I recently listened to Bob Gaudio's interview on NPR's Fresh Air about The Four Seasons and the release of his new CD, Audio With A G: Sounds of a Jersey Boy. Gaudio explains the circumstances that led to him to write "Sherry," one of the The Four Seasons' biggest hits. When asked about the lyrics and why he chose the name Sherry, Gaudio explains that he wrote the song just before a rehearsal, the name had no particular significance, and the lyrics were kept simple because he didn't have a tape recorder and needed an easy way to remember the melody before meeting Frankie Vallie for rehearsal. He claims, "It was an act of desperation." This story is a welcome reminder that some great successes come from small, practical acts."

"Lexicon Valley had a fun episode: "What Came First: Orange the Color or Orange the Fruit." I liked the Freakonomics episode: "The Upside of Quitting." Oh, and Vice's short series: "What Happens When You Die."

“I am also listening to Meet The Composer, Pitch, Steel for Brains and 99pi."

A tip from Neil Holt:

"I hate to run right to the well-known podcasts bucket, but one RadioLab episode in particular struck me while I was exploring the podcasting archives over the last few months. “Colors” reveals the awesome potential of sound to allow listeners to experience things other mediums can’t adequately express. The Radiolab crew brings in an actual choir to explain the spectrums of color various animals can see, and the harmonies grow more and more complex as the visual spectrums move beyond the visual comprehension of humans… I know that doesn’t make a lot of sense, but that’s exactly the point! Have a listen yourself and get a taste of how this guy sees the world."

More podcasts and audio on the Web stories:

podcasts Audio on the Web In our ears