Before there was Twitter there was Odeo, the web-app that aimed to make podcasting accessible, discoverable and social. While it’s mostly remembered as the humbling misstep Ev Williams, Jack Dorsey and Biz Stone took along the path to building Twitter, it was filled with innovative audio ideas the net hadn’t seen before and still hasn’t seen since.

So, before you go reinventing the Internet audio wheel, you might take a second to put on your web archeology gear, fire up the Wayback Machine, and have a look at the brilliant features inside the best web audio product that never took off. If that sounds intimidating you can check out some of the coolest features from Odeo, and their closest modern descendants below.

Quick note before we get started: I tried to reach out to Ev Williams and Biz Stone but didn’t receive any reply. As such, any and all commentary from the founders and the Odeo team is pulled from http://evhead.com and the Odeo blog archives. 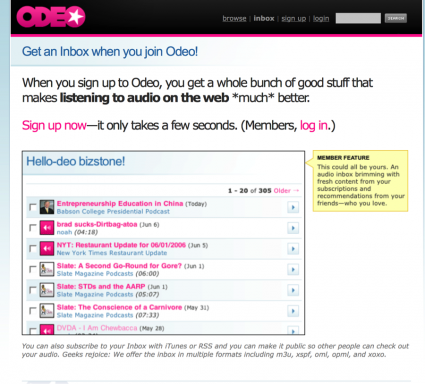 Perhaps the coolest feature uncovered in the Odeo rubble is the audio mailbox / RSS feed. Within Odeo, users’ friends and acquaintances could recommend audio, which then automatically appeared in the original user’s RSS feed (the same format used by traditional podcasts) for personal listening at an appropriate time. The potential effect of such a system was a never-ending playlist of new, interesting audio curated by the user’s best buds, available whenever and wherever. What’s more, Odeo made it really easy for friends to send simple audio messages, so the mailbox wasn’t just limited to professional audio – it could have a personal touch.

They said it:  “The other night, I sent a two-minute podcast to my girlfriend, who was out of town, and got a seven-second ‘podcast’ back that I now keep on my iPod just because it makes me smile,” – Odeo / Twitter co-founder Ev Williams touches on audio messaging while laying out a vision for casual podcast creation in the Odeo blog.

Available today: Soundcloud offers its own audio mailbox. On the plus side it’s easy to share music and sound clips with friends, and audio messages play through one by one like a playlist. On the downside, there’s no (easy) way to access the mailbox on the go and it’s not available as an RSS feed – so if you want to catch up with your audio mailbox while you’re listening to your favorite podcasts on the go (for example, during a car ride or run), you’re out of luck. 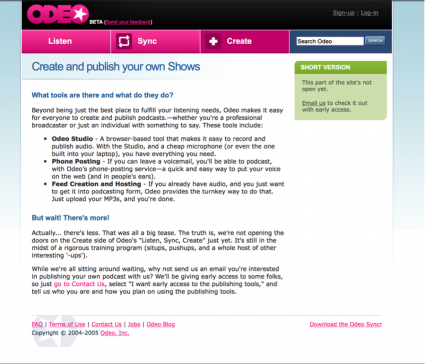 Great feature two: podcast creation in just a few easy steps (Whether these were actually “podcasts” is up for some debate, Williams had a very loose definition of the word). The web app gave users everything they needed to quickly record audio and get it into the iTunes podcast directory – outside of a mic and the guts to talk into the great void of the Internet – and it was all free. Users could also upload pre-recorded audio if they were aiming for a more professional touch.

They said it: “The idea of casual content creation in the realm of audio is a powerful one. And I think it's a yet-to-be-duly-recognized segment of the (potential) podcasting world.” – Williams in the Odeo blog.

Available today: Soundcloud, Libsyn and Audiometric.io are some of the best places to get your RSS feed up and running today, each with its pros and cons:

Yet another feature toying with the idea of the RSS feed – the audio queue allowed users to browse Odeo on the web, add files they wanted to listen to later into a queue, and subscribe to it via iTunes. This might not sound that amazing, but when you consider that anyone can subscribe to an RSS feed, it becomes a bit more interesting. Imagine subscribing to Ira Glass’ queue, your best friend’s, even your mom’s. With queues anyone could have effortlessly become a podcast curator, the host of their own personal radio station and podcast talent scout.

They said it: “… As a technology and an industry, podcasting has failed at connecting people with content in a dynamic and efficient way. There’s no Spotify for podcasting.” – Scott Pham for Mashable.

Available today: Yet again Soundcloud takes the crown for nearest available solution. Soundcloud allows users to follow other people and get their recommendations in a big, listenable list on their personal “Stream” page, kind of like how Twitter or Facebook works. But, again, spoken audio fans will find the platform lacking for a few reasons: the Soundcloud queues aren’t RSS feeds - so they won’t show up in your favorite podcast app along with your favorite podcasts on the go - and most Soundcloud users are sharing electronic music – not podcasts. 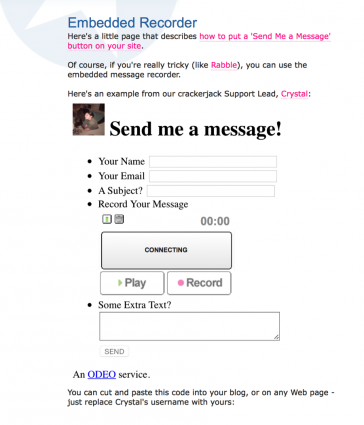 You can question the motives (was this for users or for the free advertising?) behind Odeo’s embeddable recorder, but it was certainly an interesting idea. Odeo users could leave the recorder in their blog or any webpage they happened to be able to modify. From their blog or website visitors could leave voice mail that would then be accessible in the Odeo user’s audio inbox, alongside the recommendations and audio messages they were getting from within Odeo itself.  It’s not clear how successful this feature turned out to be.

The said it: “Williams doesn’t podcast himself, and he says as a result the company’s web-based recording tools were too simplistic,” - Liz Gannes for Gigaom.

Available today: Perhaps surprisingly, this is the Odeo feature most directly available today. With SpeakPipe you can embed a recorder and get voicemail from your audience. Unfortunately even the cheapest SpeakPipe plan will run you $12/month. 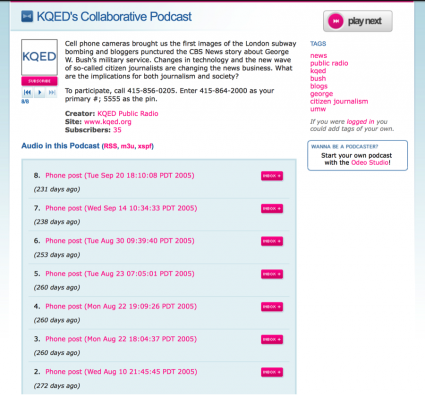 Imagine a world where you can participate in the podcast you’re listening to almost instantly, like a call-in radio show immortalized for the Internet. With collaborative podcasts Odeo allowed users to recreate this experience… for better or worse. In the example above audience members could call a number, then enter a series of additional numbers to get their calls automatically added into a KQED podcast stream. From there others could listen whenever they were in the mood.

They said it: “Most companies start out trying to do too many things, which makes life difficult and turns you into a me-too,” Williams in his personal blog, near the end of his time working on Odeo.

6) The Random “Next Podcast” Button 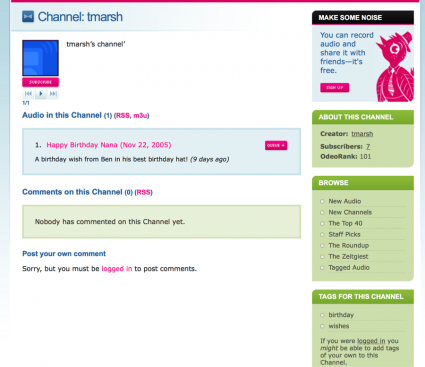 With all the focus on casual content creation, Odeo needed to figure out how to get people listening to things they might never come across otherwise. The solution?  The random “Next Podcast” button - which allowed users to experience Odeo like an audio slot machine. Any press of the button could bring the user to something as awesome as a top 40 podcast they’d somehow never tried out, to something as, well, personal as a kid wishing his nana happy birthday.

They said it: “I think it's a fun way to explore the site. You'll come across some duds, but once in a while find something neat and surprising you would have never selected deliberately.” – Williams in the Odeo blog.

Available today: This might be the one area where there’s been a definite improvement for spoken audio since 2006. Apps such as NPR One and Rivet News Radio are making it easier than ever to find news you’ll find valuable in the depths of the web, and the long-established Stitcher can help you find even more gems. The drawbacks here only apply if you’re a true masochist: there’s nothing so sweet as actually finding the needle in the haystack.

More podcasts and audio on the Web stories: