As part of his academic research, graduate student fellow Neil Holt is examining ways in which Knight Lab’s twXplorer might be updated to be more useful to working journalists. This is the first post in a series.

Knight Lab is looking to bring its well-reviewed Twitter search tool, twXplorer to the next level over the next three months and we’re hoping you’ll help shape its future by telling us where you’d like to see it go. We'd also like you to follow along as we document its changes here on the Knight Lab website.

What is twXplorer and where is it going?

TwXplorer is "a smarter way to search Twitter," as the tagline reads,  and was launched at the end of 2013. It’s made its way into the toolboxes of  journalists and non-journalists alike and offers a more convenient and organized way of finding and tracking Twitter content. Users can filter results, search in multiple languages and  save and share results from a specific date.

While twXplorer is a useful tool, we know that it can be even better.

I’ve spent the past two weeks researching what journalists and other media types are getting out of their current social media exploration tools and the problems they face (something I’ll talk about more in future blog posts). My current research represents just a drop in the bucket, but below are a few ideas that have been bouncing around Knight Lab based on what we already know. Again, we're looking for suggestions, so feel free to drop us a line or fill out our survey.

One of the most interesting and perhaps most underutilized features of twXplorer is the ability to search one of your Twitter lists in lieu of the default term search. As The Atlantic noted, journalists could "combine twXplorer with cleverly-constructed Twitter lists, and you could control your own little battalion of news-finding bots." 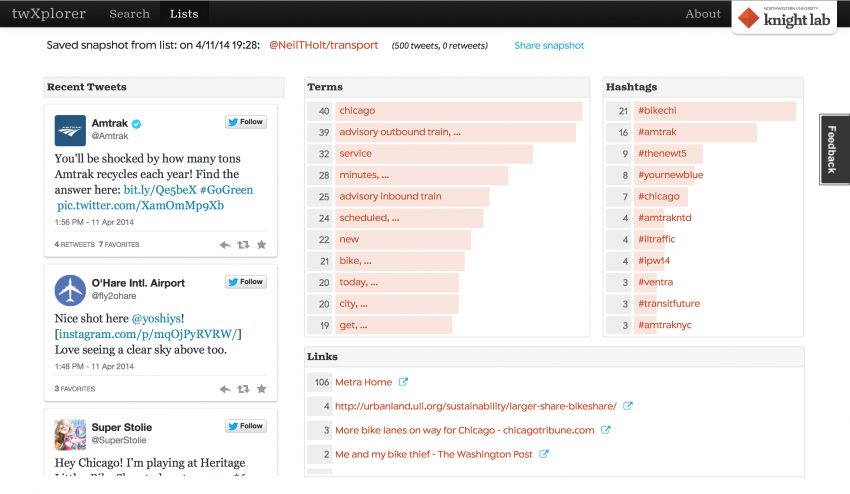 In the above example I searched a list of Chicago transit organizations I created over the course of a few days. With twXplorer I can quickly see the most frequently mentioned hashtag is #bikechi.

That’s great, but what would have been better is if I didn’t have to spend the initial hours finding Chicago traffic organizations on Twitter and grinding my way through Twitter’s inefficient list building process for each member of the list.

TweetBeat seeks to make the process much less painful by allowing a user to simply input five or more Twitter handles, press search, and presto: a related list of Tweeters at your disposal.

The added utility of the combining the two products is obvious. Input a few twitter handles, press search, peruse the search results powered by the newly created list and you’ve got a good picture of the news on your new beat.

2. More guidance: Researching, sourcing and finding readers for your story

TwXplorer is a good alternative to the standard Twitter search, but some of its other potential uses are less obvious — generating story ideas, for example, or tracking your already published work on Twitter.

With more built-in guidance or perhaps a new user interface we could potentially open minds to twXplorer uses that are already available.

TwXplorer works on mobile devices, but the interface is clunky. It goes without saying that twXplorer, like every other digital tool, has to provide a good mobile experience. This is particularly important for twXplorer because journalists are frequently on the go and cover and report the news via Twitter. It’s also important because one of twXplorer’s great applications is as a tool to follow the conversation surrounding live events — concerts, conferences, and all the rest — where mobile is the only way to connect.

4. Understand your readers and followers

Audience-focused journalism has been getting huge buzz in recent years, but there aren’t necessarily many free real-time tools that help journalists specifically understand what their audience wants to know.

With tools built into twXplorer to search followers just as it searches a list, journalists and news organizations could get real snapshots of exactly what their most devoted audience members are talking about and get a jump on reporting about the topics most important to them.

TwXplorer already allows users to take snapshots of results, which they can come back to later. At the moment it’s a manual process. Users have to login, search, and then save the snapshot. If the process were automated, it would be much easier for users to track any number of terms in a more scientific manner. We could even graph these results and allow users to click a given point, referring back to the conversations that were going on when a given hashtag spiked or dipped.

What if twXplorer didn’t open with a blank slate of empty boxes just begging to be filled by your next search, but instead a rich display of data related popular journalism beats? Knight Lab could use twXplorer to track the conversations around popular beats, and allow users to go back in time and actually see snapshots of what was being said. At a glance you could see what was going on with common beats like crime, politics, or transportation. We could even allow you add your own specific searches to the home screen so you'd automaticall see what was most important to you.

What do you think?

These are just some of the initial ideas the Knight Lab team and I have had for twXplorer. I share them because I want to get you thinking. How do you use social media in your work? What are your problems, your frustrations? What would the perfect tool for you look like, or does it already exist? Once you’ve given it some thought, fill out our survey and tell us below. Every little bit of info helps, and I really hope you’ll help us make you a product you’ll love.