Occasionally we'll do a Q&A with an impressive maker or strategist from media and its fringes. Each person brings a unique perspective on journalism, publishing and technology. Catch up and/or follow the series here.

Up until the end of last year, my daily news experience involved sifting through endless tweets and clickbait on Facebook. When I got an invite to This, a link-sharing social network that aims to “find and share the web’s best stories, ideas and arguments,” I stopped wasting time filtering through social media streams. This quickly became one of my most frequented sites. It centralized interesting, diverse content that otherwise would’ve taken me infinite scrolls to find (if they would even be surfaced at all).

With the simple premise that users can only share one link a day, the site has grown to 7600 users since its private beta launch in November 2014. This has grown in popularity with both journalists and news organizations who use it to regularly share either their own content or other things around the Internet that they find interesting.

Andrew Golis first began developing This at The Atlantic as Entrepreneur in Residence and is now the Founder and CEO of This. In the following interview (which has been edited for length and clarity), Golis talks about his approach to building an online community and his thoughts on creating a social “magazine experience” on the web.

What were your goals for This?

I spent the last decade on the distribution strategy side of media companies, both as a kind of business lead and as an editor. In particular, I focused on the way in which social sites have come to be the way people find and talk about the media they love.

One of things that I’d become obsessed with was the way in which you are able to delegate your attention to people you trust and have them share stuff they love with you. Most of the sites that were in that business were in that business as a secondhand business. One of the things we're seeing over time is that that narrows the scope of content and doesn't capture the full range of things that people really love or the full range of things people would like to be able to share and find.

When I was brought to The Atlantic and while I was running digital at Frontline, I was faced with the challenge of having to create a better intermediary between people and the media they love, both for curators to show off the stuff they love and for consumers to find a higher signal to noise experience. We tried to step into that space using this one-a-day thing to flip the equation away from volume and towards quality, and get people the ability to really mark something as special.

The product's got a ton of work to do and we know it's in its very early stage. But so far we feel really excited about how good the experience is in terms of the quality of the stuff that people share and how engaged people are despite the variety of limitations in the product.

How did you approach building and scaling an online community with This?

We initially launched a prototype back in the summer. All it was was a single front page that everyone shared and everyone could create an account and share one link a day. Atlantic Media put in the initial money and I've been able to recruit Ben Pieratt, a friend of mine who's a beautiful designer, and a really awesome studio in Brooklyn, Fictive Kin, to build this prototype and we've launched in the hopes to prove that people would want to do the one-a-day thing, that it would be a transformative experience.

We saw that working really well, but obviously in a limited way. There were 300 users on the site when we pushed out the private beta in November who'd been playing with it since the summer and we had to manually send every single one of them an invite link. From there, we started to release invites periodically to users and grow the community.

On the one hand, if someone shows up totally cold because they read an article about it or stumbled into it, they won’t know anyone on the network and that's going to be a crappy first experience. So it solves that problem of the empty room effect — anyone who joins the site joins the site because they know someone using this site. Therefore it may not be a totally full room for their particular network, but at least there's some beginnings of a network to form around them and have it be a good experience.

Then because of the network of my friends and the people I know, we were able to build a small community of people who really knew each other and who all were there because they love this stuff. We need to keep it growing because as the network grows, as I said, it's only as good as the network you have around you.

So your original user base for This consisted of people in the media space, people who work in media, or at least are exposed to it on a daily basis. How has that user base changed as the community has grown?

Mostly it's grown. Certainly some people try it and don't stick and that's part of the nature of these things. It's certainly gotten more and more diverse. At first, because of the fact that my friends write about politics and my wife's friends all write about feminism and I'm a nerd about digital media, the network was, and still is, pretty awesome if you're a digital media feminist who likes watching TV and movies.

That stuff worked for the people around who first got invites and then invited their friends. But now you start to see there's a little French-Swiss network of people who are sharing in French, and they're inviting their friends. You start to see subcommunities start to bubble up and that's the exciting thing, is when it goes from being a monoculture — "ok we're all interested in the same thing" — to just a platform and anyone who wants to use it who has any set of interests and a network to move onto it and use it.

What are some of the biggest challenges you've faced building This?

I think that the biggest challenge in anything like this is that you're making it up as you go along, or at least I am. I've never raised an angel round before or managed and built a network community before. I've kind of decided to throw myself off this cliff and figure it out. You have a lot of humbling moments where you realize you've done something stupid or you've just been thinking of something the wrong way. In general, as I've started to build the network of friends around me who are also sort of experienced with startups, you realize how much the whole thing feels like it's going to die fifteen times before it's permanently alive and you just have to keep riding that roller coaster.

Why did you decide to make This a desktop rather than a mobile experience, at least in the early stages of the product?

The main reason is because it was going to be cheaper both to build and play around with. The second reason is that it can actually be quite difficult to jumpstart a sharing economy purely on mobile. From talking to people who had done these kinds of products, they always found that even though the vast majority of consumption, and even later resharing, happened in mobile apps, at the beginning, a lot of first shares start on desktop.

In particular, my community is that community of media people and people who are sitting in front of their computers making media all day. So my attitude has been "start with what the best user experience is going to be for cheaply understanding how to get the curators who we are targeting to be able to share quickly and generate a lot of that starting material." Then we're going to basically ship from there and go build our mobile app because we do know that clearly that's going to be the majority of the consumption.

Currently there is following and sharing on This. Are there other ways you'd like people to engage with each other and what people are sharing?

I am really interested in discussion. I have an instinct as to how we'll attack it and I do think eventually we'll need to start letting people talk to each other. I'm very wary of group public chat. I just think that, 1) if people are going to do group public, there's a lot of good places to do it, and 2) even though group public has become the default mode of the Internet, it actually is the worst form of conversation in real life.

So it's kind of odd to me that so much of the conversations around media have to be group public because they can fall apart so quickly and be derailed. I'm really interested in intimate conversations and that feels like it might be a good fit for people sharing stuff that they're really passionate about. We probably won't tackle that for a little bit longer. There’s some more basic work to just get the thing polished up before we get there.

What have you paid attention to most in terms of growth so far?

I think growth at this stage is necessary to the extent that it is allowing people to form the networks they want to have. I don't think we need to worry if we’re going to get a million users. That's not anywhere near my thinking. What I'm trying to understand is what the right feedback loop is to make people feel like it's a good experience. 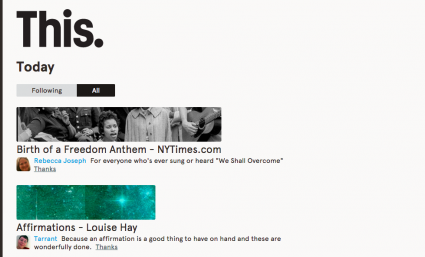 In some previous interviews you've talked about how This is a fight against this constant stream of information that we get from Facebook, Twitter, and other social media sites. How do you plan on encouraging on the site as it grows without turning that "All" shared articles tab into another stream?

People don't actually look at it that much. The logged in homepage gets about ten times the amount of traffic on any given than the "All" tab does. I'm assuming that there'll just be a point when the “All” will be useless and it'll just go away. We may play with giving users the ability to categorize and tag stuff so that we can do discovery there. We may play with finding ways to recommend users to follow.

I think that the follow model and the one link per day will maintain the core signal to noise, that that combination is what we built the solution around.To me, it feels like what we're encouraging our power users to do is come up with something really good to share. That feels like it's different from what other platforms are doing because there is such an incentive to volume on other platforms where the more stuff you put into the system the more likely you are to build your following.

What social aspects are you leveraging in This to influence smarter news consumption or sharing?

That's the aspiration that I am attacking - when you pick up your mobile device or your computer at 8 o'clock you're thinking about looking at a magazine or a newspaper or picking up a book or turning on the TV, what's the kind of magazine experience on the web? That's what I'm trying to build.