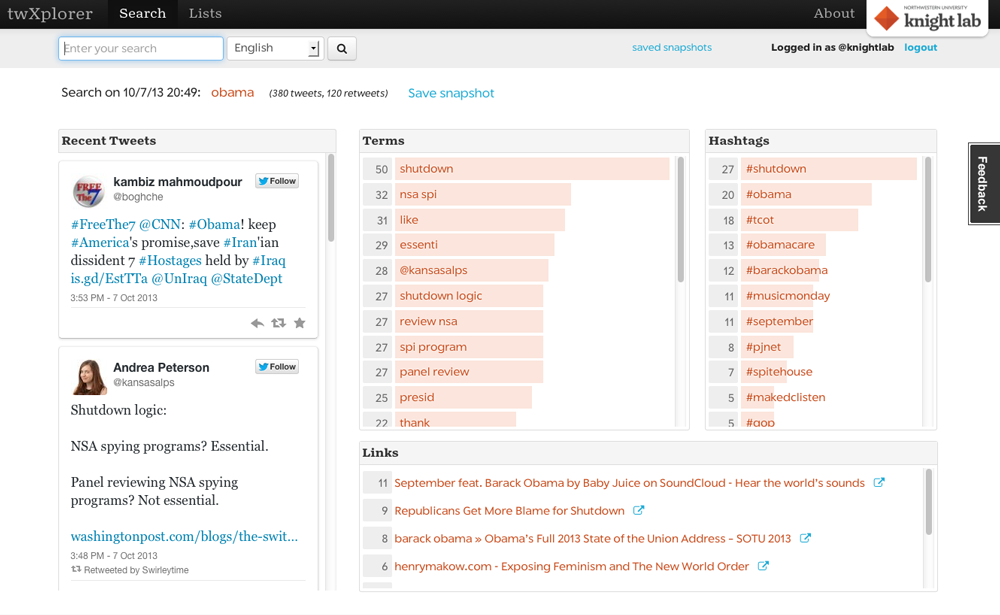 Just over two weeks ago we launched twXplorer, a tool to help people make sense of searches and find interesting conversations on Twitter.

When we launched the tool we didn’t know how it would be received or what use people would find for it. So far, we've been pretty happy to have more than 13,000 people use twXplorer and to get a few kind words from The Atlantic (“control your own little battalion of news-finding bots”), The Buttry Diary ("Twitter search just got waaaay better"), All Twitter, and Spain’s RedAssociales.

Kind words are great, of course, but nothing beats honest feedback. If you've used the tool and have some ideas or special use cases that twXplorer might address, we'd love to hear from you. We're likely to make a few tweaks to twXplorer and your feedback will help us determine which direction to take. Drop us a line at KnightLab@northwestern.edu.

In the meantime, a few of the features requested so far:

Again, that's a pretty long list and we'll be digging deeper over the next few weeks to learn more about how people actually use the tool.

Remember, if you're a twXplorer user, you can help shape its future. What would make the tool really useful for you? What part of Twitter search is the most painful to deal with, either on Twitter itself or on twXplorer? What do you consistently find yourself wanting when you search?

Have an answer? Drop us a line at knightlab@northwestern.edu.